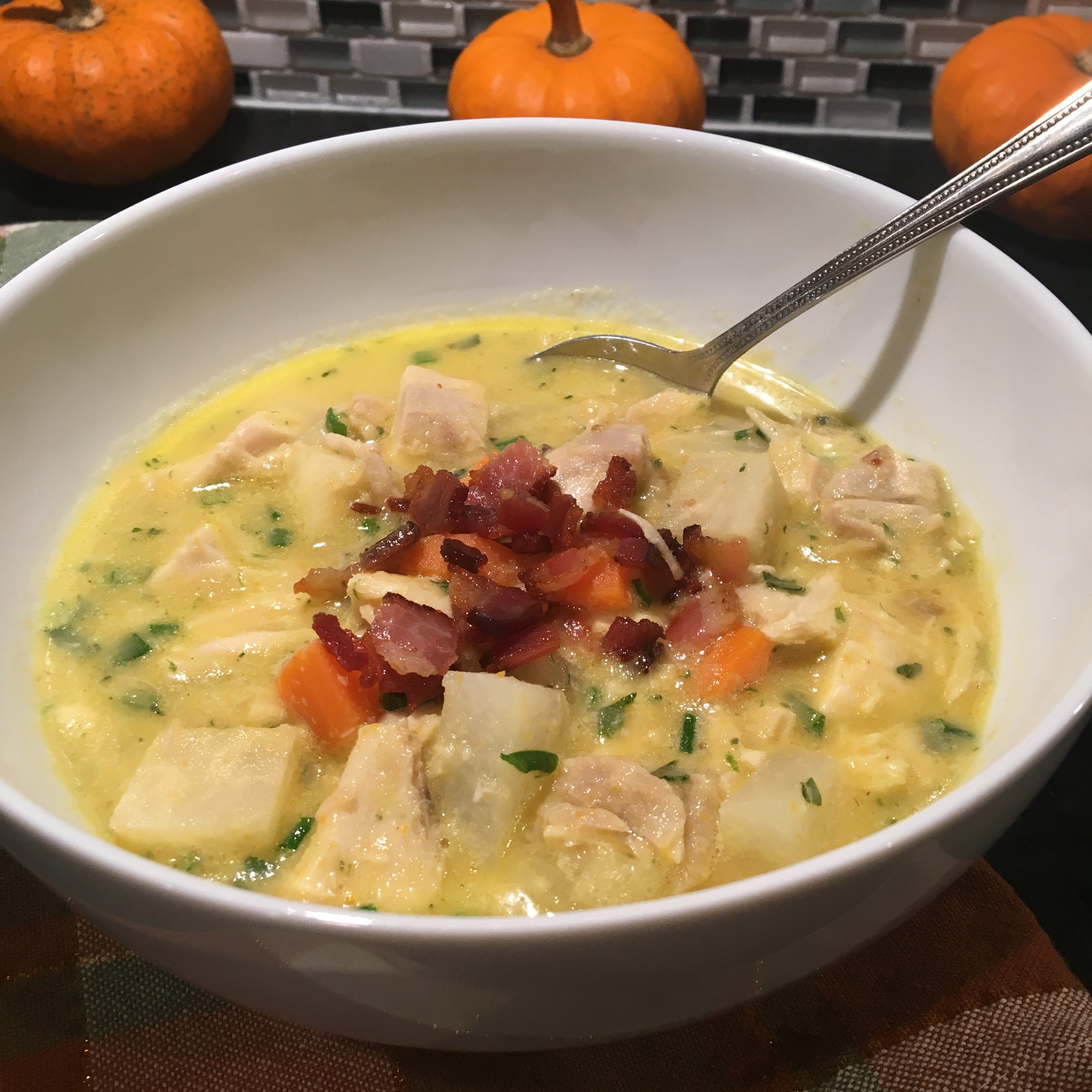 Confession: this picture is not exactly the recipe I’m giving you. I had a different one up but it was kinda blah looking (not that this is great either, I realize I’m no food photographer but am not letting that stop me from sharing delicious recipes!). This soup pictured doesn’t have the spinach or smoked paprika added (the horrror!) and includes diakon radish, not in this original recipe. I hope you’ll forgive me.

We happily ate the original chowder for several meals and my husband declared it to be “some really good sh*t” which is basically a 5-star review.

Want to know the secret to a good soup, stew, chowder, etc? Homemade broth. Store-bought is quick and easy and this will totally still taste good but making some simple crock-pot or stove-top broth takes soups to another level. Getting some good fat and seasonings in there helps as well, as does pureeing some of the veggies into the broth.

Why this is healthy:

This chowder has several types of vegetables, all of them lower in carbohydrates and easy to incorporate into a lower-carb lifestyle.

The broth is made from a chicken I got at the farmer’s market and is full of vitamins, minerals, and collagen that is great for the gut, hair, skin, nails and is easy to digest and absorb.

It’s full of protein and stable, non-toxic fats that help build healthy cells which in turn build healthy bodies. They also both help to keep you full and satiated so you’re not craving those less healthy foods.

Why this tastes good:

It’s got bacon in it.

Heat a heavy bottomed pot on medium heat. Chop up the bacon and fry in the pot until crispy. While that cooks, chop the chicken thighs into somewhat uniform bite-sized pieces. When the bacon is finished, remove it with a slotted spoon but reserve the grease. Add the chicken and season with salt, pepper, and the paprika and coriander. Allow it to cook for about 3 and then stir it around and cook for another 3-4 minutes.

While the chicken is cooking, cut up the veggies if you hadn’t already. Once the chicken is finished (doesn’t have to be cooked through yet) remove it from the pan. If there is a bunch of brown bits stuck on the bottom, throw a little broth, water, or even white wine or apple cider vinegar in to deglaze the pan. Scrape up all the yummy bits. Let that liquid cook off and then add the cooking fat. Add the onion and allow it to soften a bit. Add in the garlic, carrots, and celery root and allow that to cook for 5 minutes or so to get a little brown. Give it a few stirs while it cooks.

Next, add in the chicken broth and bring to a boil. Lower the heat and allow it to simmer for 6-8 minutes or until the veggies are somewhat soft. Not mush though – they’re going to cook longer after the next step. Once the veggies are partially cooked, use a slotted spoon to remove about ⅔ of them. Allow the rest of them to simmer in the broth for another 8-10 minutes until they are very soft. Use an immersion blender (or regular blender) to blend these soft veggies in the broth to thicken it up a bit

Put the rest of the partially cooked veggies, chicken, coconut milk, and about half of the bacon pieces back in the pot. Bring it back to a simmer and allow it to cook for another 8-10 minutes or until the rest of the veggies and the chicken are cooked through. Add in the spinach which will wilt quickly, taste for additional seasonings needed, and serve with some of the leftover crumbled bacon pieces on top!

I actually didn’t use any onion or cloves of garlic in this. I am currently following a low FODMAP approach to my diet to help my gut heal and unfortunately that means no onion or garlic. I did throw in a few tablespoons of a garlic-infused olive oil which adds garlic flavor. All this to say that even without the onion and minced garlic this was really good! So if you’re following a low FODMAP diet, you can easily adapt this to fit!

Let me know if you try this and what you think!